Ovarian cancer kills 14,000 women in the United States every year. It’s the fifth leading cause of cancer death among women, and it’s so deadly, in part, because the disease is hard to catch in its early stages. Patients often don’t experience symptoms until the cancer has begun to spread, and there aren’t any reliable screening tests for early detection.

A team of researchers is working to change that. Their approach uses machine learning techniques to efficiently analyze spectral signatures of carbon nanotubes to detect biomarkers of the disease and to recognize the cancer itself.

Ovarian cancer is hard to detect in it's early stage. A perception-based nanosensor platform could change that. 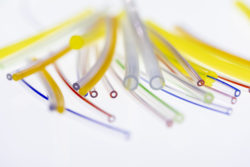 "We demonstrated that a perception-based nanosensor platform could detect ovarian cancer biomarkers using machine learning," says Yoona Yang, a postdoctoral research associate in Lehigh’s Department of Chemical and Biomolecular Engineering and co-first author of the paper along with Zvi Yaari, postdoctoral research fellow at Memorial Sloan Kettering Cancer Center in New York. The authors also included Ming Zheng, a research chemist at the National Institute of Standards and Technology, Anand Jagota, a professor of bioengineering and chemical and biomolecular engineering at Lehigh University, and Daniel Heller, associate member and head of the Cancer Nanotechnology Laboratory at Memorial Sloan Kettering Cancer Center.

Traditionally, detecting biomarkers for disease requires a molecular recognition molecule like an antibody to be matched with each marker. But for ovarian cancer, there’s not a single biomarker—or analyte—that indicates the presence of cancer. When multiple analytes need to be measured in a given sample, which can increase the accuracy of a test, more antibodies are required, which increases the cost of the test and the turnaround time.

"Perception-based sensing functions like the human brain," says Yang. "The system consists of a sensing array that captures a certain feature of the analytes in a specific way, and then the ensemble response from the array is analyzed by the computational perceptive model. It can detect various analytes at once, which makes it much more efficient."

For this particular study, the array consisted of single-wall carbon nanotubes wrapped in strands of DNA. The way in which the DNA was wrapped, and the variety of DNA sequences that were used, created a diversity of surfaces on the nanotubes. The diverse surfaces, in turn, attracted a range of proteins within a uterine lavage sample enriched with varying levels of ovarian cancer biomarkers.

"Carbon nanotubes have interesting electronic properties," says Heller. "If you shoot light at them, they emit a different color of light, and that light’s color and intensity can change based on what’s sticking to the nanotube. We were able to harness the complexity of so many potential binding interactions by using a range of nanotubes with various wrappings. And that gave us a range of different sensors that could all detect slightly different things, and it turned out they responded differently to different proteins."

The machine learning algorithm was trained using the data from the nanotube emission—the spectral signatures—to recognize the pattern of emission that signaled the presence and concentration of each biomarker.

"The mental breakthrough here is that these nanotubes are nonspecific sensors," says Jagota. "They don’t know anything about biomarkers, meaning they aren’t programmed to bind to anything specific. All we knew is that they can be exposed to an aqueous medium, and whatever they’re exposed to within that medium will produce spectral shifts and changes in magnitude. And using a combination of these sensors, we were able to train the algorithm to mathematically transform these inputs to outputs with high accuracy. It’s like having 20 sets of eyes that all see overlapping things. No single eye is that good, but as a collection, they can be trained to perform better than the existing detection methods for ovarian cancer."

Those patients without ovarian cancer included both healthy people and people with other diseases.

In this part of the study, the nanotubes were functionalized with quantum defects, which essentially increased the diversity of responses the nanotubes would provide.

"The nanotubes had a certain molecule bound to it that gave it an extra signal in terms of data," says Jagota. "So richer data came from every nanotube-DNA combination. And the model was trained not on the biomarker, but on the disease state."

The model developed a "disease fingerprint" from the spectral emissions of the nanotubes. The results were statistically significant in terms of the model’s specificity in detecting ovarian cancer and sensitivity in detecting both known and unknown biomarkers of the disease.

Heller says an analogy for how the machine learning model works - in both papers - is the human nose. For example, there’s not a single odor receptor for every smell.

More about Lehigh University at: www1.lehigh.edu