Researchers at the Fraunhofer WKI and the Fraunhofer IAP, in collaboration with industrial partners, have achieved initial success in the development of bio-based flame retardants in bioplastics. In the future, it could therefore be possible to utilize plastics in electronics and electrical engineering that consist of 100 percent bio-based materials. Within the framework of the research project, processing was tested by means of compounding, injection molding and additive manufacturing.

In order for bioplastics to be utilized in the fields of electrical engineering and electronics, they must – just like conventional plastics – fulfill high flame-retardancy requirements. Up to now, there have been no bio-based flame retardants available for use in the production of bioplastics.

Flame-retardant bioplastics could be processed to create components for electrical engineering and electronics by means of, for example, injection molding (bio-granules) and additive manufacturing (bio-filaments). 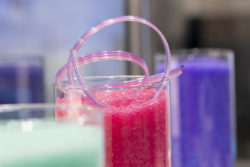 You are interested in this topic? More interesting products and exhibitors you will find in our COMPAMED catalog:

This is where a research project conducted by the Fraunhofer institutes WKI and IAP, in collaboration with industrial partners, came to the fore. One focus was on the development of a halogen-free flame retardant that can be used in the smallest possible quantities and therefore at low cost. In addition, the utilization of already available flame retardants was tested for use in compounding with non-reinforced biopolymers and with biopolymers that had been reinforced with wood particles.

"In order to achieve our goal of developing bio-composites for electrical engineering and electronics that are as close as possible to being 100 percent bio-based, we first had to redirect our focus towards the development of new, bio-based flame retardants. Syntheses of halogen-free flame retardants on the basis of bio-based alcohols and phosphorus-containing compounds were performed. We subsequently conducted numerous compounding trials using polylactic acid (PLA) as a matrix polymer," said Dr. Arne Schirp, Project Manager at the Fraunhofer WKI, explaining the approach.

For optimal flame retardancy, the homogeneous distribution of the flame retardants in the PLA biopolymer matrix is essential. The coupling with the biopolymer matrix should be achieved through the specially developed reactive flame retardants. Electron-beam cross-linking was adopted as a new procedure for attaching the flame retardants to the matrix. This is a non-thermal process that is widely used in the treatment of plastics, but which has as yet rarely been applied to bioplastics. The properties of the polymers are modified here by triggering cross-linking and coupling reactions that can be controlled via the irradiation dose. In the tests, also at the industrial partner BGS Beta Gamma Service, one additive proved to be effective in which the cross-linking reaction of the PLA verifiably outweighs the degradation caused by the electron beam. Other additives were also extensively tested. The results improve our knowledge regarding the additives – some of which were used for the first time – as well as the procedures involved in plastics processing and the effects of irradiation.

In the synthesis of halogen-free, novel flame retardants on the basis of bio-based alcohols and phosphorus-containing compounds, the focus on the production of fully esterified phosphates proved to be promising. Following optimization trials, compounding with PLA was realized, from which a formulation for the production of flame-retardant PLA compounds was developed. Flammability tests in accordance with UL94 resulted in a very good classification (V-0) at a test-specimen thickness of 1.6 mm.

The researchers at the Fraunhofer WKI and Fraunhofer IAP furthermore conducted tests into the compounding of non-reinforced biopolymers and wood-particle-reinforced biopolymers with halogen-free, currently available flame retardants. They were able to determine that these are procedurally suitable for PLA and bio-based polybutylene succinate (PBS) as base polymers. In the processing of PLA, the use of a heatable mold is required in order to achieve high crystallinities and, consequently, high thermal stability in the components. In addition to good flame retardancy, thermal stability is an important criterion for the application. The team succeeded in developing formulations for PLA and PBS which fulfill, to a large extent, the flame-retardancy requirements in the target applications and which can be processed via injection molding and additive manufacturing. This was demonstrated through various tests, including UL94, glow-wire testing, and tracking-resistance testing.

The processing results obtained through injection molding at the participating industrial partners are very encouraging. It was possible for technical flame-retardant components and parts – such as flexible adaptors for switch boxes and storage containers from the logistics sector – to be manufactured under near-production conditions. For the PBS-based materials, the cycle times lie within a range which is comparable to the petro-based plastics in use today.

In the experiments with the addition of wood particles, the researchers were furthermore able to demonstrate that these have a positive influence on the flame-retardant performance. The heat-release rates were significantly reduced through the addition of wood. Simultaneously, however, there was a shortening of the ignition times. For wood-fiber-reinforced, flame-retardant and crystallized PLA compounds, a maximum thermal stability of 140 °C to 160 °C was verified.

Furthermore, the scientists developed flame-retardant formulations on the basis of bio-polyamides (PA) for injection molding. The formulations fulfilled the classification V-0 (1.6 mm thickness) in the UL94 test and, compared to reference materials, largely fulfilled the requirements with regard to the glow-wire test and for tracking resistance (CTI). The cross-linkability of three flame-retardant Bio-PA grades was investigated for the first time in electron irradiation. It was found that Bio-PA grade PA6.10 is the most cross-linkable, and Bio-PA grade PA11 the least. The researchers were also able to demonstrate here that the addition of wood particles results in a positive influence on flame-retardant performance. As in the experiments with PLA and PBS, heat-release rates were reduced by wood addition, with a simultaneous shortening of ignition times. For almost all PA-based formulations, irradiation caused an increase in tensile strength and modulus of elasticity, as well as a reduction in notched impact strength.

"The formulations on the basis of Bio-PA have so far only been processed on a small scale in the laboratory compounder and mini injection molding. Further research is therefore required in order to find out how processing can be achieved using twin-screw extruders and in injection molding. Optimization of the flame-retardant PA-based compounds should also be carried out with regard to the entire range of requirements from the electrical engineering and electronics sectors," concluded Dr. Schirp.