Interview with Dr. Thomas Neubert, Manager of the EU Project FAST at the Fraunhofer IST

Using 3D printers to make body parts, especially bone structures, is not an entirely new approach. However, using plasma jet technology to simultaneously embed a special coating to the scaffold is certainly a new idea. The Fraunhofer IST just succeeded in implementing this process.

In this interview with COMPAMED-tradefair.com, Dr. Thomas Neubert explains who benefits from the new technology, describes the printing process and reveals what’s next for the project. 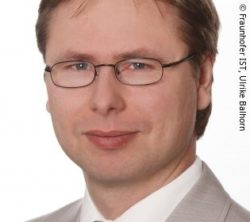 Dr. Neubert, what goal does the Fraunhofer IST pursue with this project?

Thomas Neubert: Our goal is to support patients who have lost bone fragments due to an accident or cancer for example. The medical treatment approach is designed to help the body self-repair the bone injury by implanting a so-called scaffold. Our scaffolds are not mass-produced but customized to each patient’s unique needs. We accomplish this with the help of 3D printing and a biodegradable synthetic material. This polymer scaffold is designed to promote bone development and growth. On the one hand, the scaffold is tasked with absorbing the mechanical stress on the bone, thus allowing the bone to withstand loads as quickly as possible again. On the other hand, the scaffold is also intended to promote bone growth. The implant should be gradually enveloped by new bone material, while the printed scaffold slowly dissolves over time. The polymers used for these types of medical implants have been in application for a while. Our goal is to treat and coat the surface structure of these scaffolds to where bone cells feel right at home. They should adhere to it and grow to the highest possible level. Our mission at the Fraunhofer IST is to co-develop a coating technology for these types of porous polymer scaffolds.

You succeeded by using cold plasma. How do you change the surface?

Neubert: We use a chemical vapor deposition process. This is called PECVD in the industry and stands for "plasma-enhanced chemical vapor deposition". In our setting, this is done via atmospheric pressure. We use a so-called precursor - a gaseous layer-forming substance, which requires excitation energy so that a layer can be deposited. We use a plasma jet for this, which is a nozzle through which gas flows. The gas is highly ionized until it glows. It is able to pass on the excitation energy to the precursor molecules, which subsequently deposit on the scaffold surface. The lukewarm plasma jet contains molecules with reactive amino groups. They bond with the surface and promote bone cell adhesion.

Coating of framework structures for implants with a plasma jet.

Does the gas reach all areas of the scaffold?

Neubert: The gas penetrates deeply into the porous scaffold structure. This depends on the precursors we use. We have studied various options. The depth of penetration varies and depends on the vapor pressures of the precursors. Our approach involves a hybrid technology, where we use a tiny plasma jet (co-developed with our Italian partner Nadir Srl), which we integrated into a 3D printer. Our hybrid process doesn’t apply a finish coating to the finished scaffold structure. Instead, we apply coats throughout the entire printing process. We print one or several layers and then the plasma jet glides across the component. After that, the printing process starts again etc. This ensures that we treat the whole area of the scaffold structure.

Who provided the prototype?

Neubert: Our system is based on an existing platform by our project partner GeSiM (Gesellschaft für Silizium-Mikrosysteme mbH)We used this system to produce a 3D printer and to integrate the plasma jet, allowing us to run both processes almost simultaneously in one device.How long does it take to make an implant? Neubert: By combining both systems in one device, we expect to simplify production processes and subsequently reduce costs. That’s the basic concept, but we are unable to quantify this at this stage because the project has not progressed far enough yet. This generally doesn’t translate into additional waiting times for patients because the printing process only takes a few hours. Meanwhile, it likely takes longer to plan the surgical procedure.

Can conventional 3D printers be retrofitted with a plasma jet?

Neubert: This is definitely not possible with conventional devices from the hardware store. Our printing process requires polymer granules, which in turn necessitated the development of a special granular extruder.

What are your next steps to prove the appeal of the bone implant?

Neubert: The project partners already conducted in vitro studies during which the coated scaffolds were colonized with osteoblasts. The tests yielded positive results. The next step involves testing in animals to monitor the implants, which is currently in the planning stages. And lastly, we will continue to improve the printer prototype here at the Fraunhofer IST. That is to say, we will make it fully functional to where it can be operated by different people and requires very little instruction. Completion of this step is expected by the end of November 2019. Needless to say, we also hope to subsequently find new project partners to continue to advance the technology and bring it to market and conduct clinical trials at a later date.
Learn more about the project and its partners by visiting the project website: http://project-fast.eu/en/home

The interview was conducted by Simone Ernst and translated from german by Elena O'Meara.
COMPAMED-tradefair.com
Exhibitors of COMPAMED dealing with 3D printing can be found here!