Disinfection is a key strategy to contain the current and future pandemics. Publicly accessible buildings, facilities, transportation, and hospitals need effective protection against viruses and bacteria.

Researchers at the Fraunhofer Institute for Manufacturing Technology and Applied Materials Research IFAM have teamed up with the University of Szeged in Hungary for the COVID-DEKONT project to develop a novel active composition and integrate it into a coating that facilitates successful decontamination of viruses and bacteria via photocatalysis. In this COMPAMED.de interview, Dr. Volker Zöllmer, materials scientist, and Head of Department "Smart Systems", and Dr. Claus Schreiner, chemist, and research associate at the "Paint and Lacquer Technology" department at Fraunhofer IFAM, explain how the technology works and reveal why it is different from previous solutions.

Disinfection using light or UV radiation thanks to photocatalytically active coatings is not a new strategy. What is the new approach of the COVID-DEKONT project?

Dr. Volker Zöllmer: Ultimately, photocatalysis is at the heart of the antiviral efficacy of our material solution. But to your point, photocatalysis is indeed not a new approach. Our project essentially has accomplished two aspects:

For one – and this is not a new approach either – we have substituted silver-doped titanium dioxide. Conventional photocatalysis utilizes UV radiation. To carry out visible-light photocatalysis, you typically use silver-doped titanium dioxide with a silver content ranging from 0.5 to two percent. This enables the photocatalyst to not only absorb shortwave and thus high-energy UV light, but also longer-wave and therefore lower-energy light above 430nm.

Our new approach aimed to substitute the silver in this setting.

Dr. Claus Schreiner: It sounds easier than it is. However, it is not just a question of mixing in silver or – in our case - copper chloride with titanium dioxide. This prompts a real synthesis, a so-called CO-reaction, which subsequently leads to a doped titanium dioxide material. 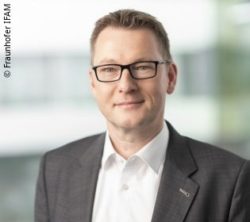 What made you substitute the "usual" silver-doped titanium dioxide with copper?

Schreiner: From a process technology perspective, it is easier to work with precious metals such as silver. However, silver is more toxic than copper and poses a higher risk for living organisms. Various studies have shown that nanosilver is eventually deposited both into organisms and the environment.

We should point out that the goal is not just to show that copper-doped titanium dioxide is a suitable photocatalyst, but that it is also suitable for target applications in the field of coating systems. While we are not yet working with industrial-scale quantities, we can produce more than just a test tube of material.

We were able to incorporate the new material into different coating systems and apply them on different substrates. It processed in the typical way we expect from corresponding coatings, exhibiting no differences to the silver-doped titanium dioxide.

Zöllmer: Our approach to substitute the more toxic nanosilver with copper is not unique. But what makes our project approach so significant and innovative is that we mixed the copper-doped photocatalyst with a so-called layered silicate. The combination of layered silicate and titanium dioxide provides a multitude of benefits.

Are you interested in this topic? In the COMPAMED catalog you will find products and exhibitors:

Can you describe the role of layered silicates in more detail?

Zöllmer: Many studies try to incorporate these photocatalysts – without layered silicates – into coating systems and other surface coatings to degrade bacteria/viruses or other contaminants or toxins.

If a photocatalysis is to take place, meaning sunlight hits a titanium dioxide particle, degradation occurs when so-called radicals are initiated. Radicals are formed in the presence of water or moisture. Technically speaking, photocatalysis doesn’t take place without the presence of moisture. Applied to the pandemic, this mechanism factors in when it comes to aerosols as the viruses are transported via the moisture in the air we breathe.

The benefit of layered silicates like the phyllosilicates found in cat litter or clay pebbles as a substrate for potting soil, is that they absorb water or moisture. In the case of our polyurethane coating, they bring viruses/bacteria more effectively into contact with the titanium dioxide and accelerate the photocatalytic degradation rate.

Schreiner: Here’s the caveat: The photocatalyst decomposes organic matter. A common binder, meaning the film forming component of the coating, is an organic polymer. It obviously has a different chemical structure than a bacterium, but both are essentially organic matter.

In contrast, phyllosilicates are inorganic materials. To recap: The phyllosilicates enable our material to come into more effective contact with the bacteria/viruses slated for decomposition, while simultaneously protecting the coating from degradation.

If you didn't have these – I like to call them protective layered silicates -, the coating would be degraded with the same probability as the viruses/bacteria. Consequently, certain protective effects of the coating would fall away. Our combination approach has succeeded in maintaining an equilibrium between catalytic activity sustainment and simultaneous organic matrix protection.

Photocatalytic coatings reduce the microbacterial load on surfaces. Researchers at Fraunhofer IFAM have now succeeded in developing a new coating material composition which more effectively brings the catalyst together with the microorganisms and accelerates their degradation.

Are your project findings only applicable to COVID-19?

Zöllmer: No. Even though the pandemic has boosted the development of this type of coating system, we have been working on this class of materials for quite some time. Since 2005, we have closely collaborated with the University of Szeged and Professor Imre Dékány, who is an internationally renowned expert in photocatalysis.

What are the applications for this material composition?

Zöllmer: Although we are still in the development stage, you can use this composition wherever you want to coat surfaces. Examples of this include applications in public transportation settings such as handrails in buses and trains, aircraft cabins, or car sharing situations. You can apply the coating wherever you want to prevent viral transmission. Amid the ongoing pandemic, the solution is a great idea for any public space and the healthcare sector – and especially in hospitals.

Schreiner: The general coating advantage is that you can essentially coat anything: plastic, wood, and various metals.

Even though wood needs a different coating system, the technology is universal. You only need to adapt the coating to the respective application, which is among our core competencies at the Fraunhofer IFAM.

The interview was conducted by Anne Hofmann
(translated by Elena O'Meara)
COMPAMED-tradefair.com