Wearables for your ears: innovative sensor technology to support research

Tasked with wearing a device for 24 hours a day over several weeks for a research study? If so, it should fit very comfortably and be easy to wear. "It is!", says Dr. Johannes Kreuzer of Cosinuss in a conversation with COMPAMED-tradefair.com. His company collaborates with the Technical University of Munich in a recently launched study, requiring test subjects to wear a temperature sensor. Learn what else the device can do in this interview! 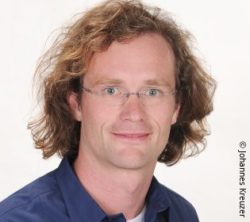 Dr. Kreuzer, your temperature sensor is a device that is placed in the ear and worn like a hearing aid. Why did you choose this way of wearing your solution?

Dr. Johannes Kreuzer: Besides a built-in temperature sensor, we also integrated sensors to track oxygen saturation and heart rate into the device. If you plan to measure all of these parameters, there are few places on the body where this makes sense. The ear canal is predestined for this task.

What sensor technologies are integrated into the device?

Kreuzer: The device features a temperature sensor and optical sensors that work with light. The sensors take between 100 and 250 measurements per second. The data is used to calculate the different values and levels.

If the device is continuously monitoring parameters for an extended period of time, it might wear out. Do you already have any stats about the device lifecycle?

Kreuzer: The first devices were launched about five years ago and still work effectively and reliably. For us, this indicates an excellent lifecycle.

How can end users utilize the data?

Kreuzer: There are several ways. We developed an app that visualizes the data in an easy-to-understand format. Admittedly, this is more interesting and relevant for personal use. Clinical studies like the one we are conducting together with the Technical University of Munich have specific requirements that go beyond this scope. In this case, a Bluetooth receiver wirelessly transmits the data to a server via network service. The advantage here is that the test subjects don’t have to do anything at home, except put a small plug and play Bluetooth receiver into their wall outlet.

Exhibitors and products dealing with sensors

Find exhibitors who deal with sensors in the catalogue of COMPAMED 2019!

The test persons wear the sensor in their ears for days. During this time, the sensor permanently records data.

Is there any feedback on how the test subjects feel about wearing the in-ear solution during the night?

Kreuzer: Our ongoing study with the Technical University of Munich (TUM) has only just started, but we have already conducted studies with the same setup - older adults - who felt very comfortable with the fit. We had received a lot of positive feedback. Actually, older people are usually more concerned about whether they are wearing the device correctly since they put it on themselves. We can typically ease their concerns in this regard as well.

In one study, test subjects wore the device for 24 hours a day over 15 consecutive days. They did so voicing no concerns. It should be noted that this was done as part of scientific studies that served a specific purpose. Obviously, we cannot expect personal users to wear the device without good reason – like an illness - over a longer period.

Is your ear-worn device an option for athletes?

Kreuzer: We initially started with a wearable device for athletes, but it measures fewer parameters. Athletes want to primarily track their resting heart rate and subsequently compare it by measuring their heart rate during exercise. Blood oxygen levels are not as important in this setting. One time, we asked a sailing team to wear the sensor technology during the night. The goal was to track their level of relaxation after having a good night's sleep. Firefighters are another group that wears our device on calls. There are a variety of potential applications.

How does wearing the solution affect hearing levels? After all, good hearing is essential for firefighters when they are out on a rescue mission.

Kreuzer: The sound level is reduced by about 3 decibels, which the brain is able to quickly compensate. In reality, you won’t notice the difference when you wear the device. You actually only detect it once you remove it, as noises suddenly appear to be "louder" again.

The interview was conducted by Simone Ernst and translated to german by Elena O'Meara.
COMPAMED-tradefair.com

Further exciting articles on the topic from the COMPAMED-tradefair.com editorial team: